Do You Feel Lucky?

(and feel free to comment! My older posts are certainly no less relevant to the burning concerns of the day.)

So I saw this out there, and I thought "Now, this is food for thought about an awful lot of things, arguably, wrong with America." 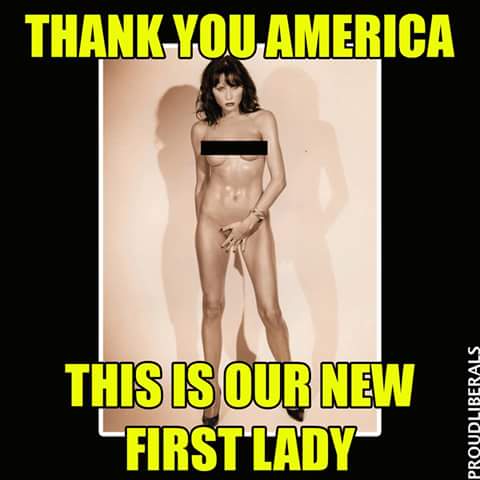 As to the image itself: I don't see anything wrong with this. At all. The face, a little maybe. But the point is, this sick aversion we're all supposed to have, to hiss and cringe at the most basic and human of all our natures - the natural animal we are, unadorned in glory or even boredom; our natural human being and all you see and all you get to do with it - this sick aversion is at the root of our worst most pervasive perversions, predations, depersonalizations and neuroses.

You can say the point of this slutshameful meme is hypocrisy: because this is the person so-called conservative Christian values advocates are, apparently, fine with being "our first lady." Well, you'd be right the point is hypocrisy: because if you're a supposed liberal, presumably with enlightened views on sexuality, personal expression, and in any case very much against "slut shaming," you're the hypocrite for creating this image. And from the so-called Christian values side, there's no hypocrisy at all in acknowledging a person who is trying to walk that road now, may have walked a far different road in the past. Or may fall down on that road, now, and get back up. That's not hypocrisy, that's the point of Christianity.

When it comes to calling shame on innocent nature, I am willing take to task any person claiming to represent any value or morals system. On the topic of the human form, on sex itself, properly-expressed. Now, "properly-expressed according to whom?" you may well ask! I solemnly assure you, it is as appropriate for religion to advance a viewpoint on the proper expression of sexuality as it is for an individual person to hold a viewpoint on proper expression of sexuality. Yet it is equally appropriate, when we see such stances advanced, and where we can see and show where the stance in question is sick, unjust, or unhealthy, we can question it. We can object to it; we can remonstrate over it. We can rebuke the stance on merit. It's not only appropriate, it may be courageous. But only if you yourself can see, show, say where it is wrong. It would be foolhardy to try, if you can't. You can't say right from wrong if you can't show and tell. But before you go looking around for the wherefores and whys of right and wrong, get one point straight: don't go blaming your nudity prudity on God.

The fig leaf wasn't God's idea, people. It was ours.

The human body, its form and expression through all variations: what's natural is not shameful. And especially, its forms of expressing in the fullest act of human union bodies and souls can come together to make, making one bucking, thrashing beast beautifully for a few minutes - something you never both come all the way back from, by the way - or for those who consensually mutually prefer their sex a bit less significant, why not? Just performed just for mutual fun, and a thrill to know you better this way; what can be called wrong about that? Casual or serious as death til you part, either way two consenting adults want to play, is FAIR PLAY. Or just one consenting adult, standing or lounged or appearing just as he or she wants, and happens to be - wearing whatever or just a killer Blue Steel. Who is disgusted by this? A human being, beautiful as may be, just as they are? Or humans being, doing any or all of the things together they do so beautifully ugly.

Who is disgusted by this? Who in that scenario is the disgusting one? What's wrong with you, America? GROW UP.

It's time we start prudeshaming the slutshamers. If we haven't already, I mean. One important point before you do, though: it's actually perfectly okay for a Christian to be a proud prude! Because you can guarantee this: a Christian will never, ever judge another's sin.

Some of them just think they can, but we already got a guy for that.
Posted by dogimo at 11:07 AM

Top 9 of All Time (Rotated at Random Intervals) - All "Hell" label edition!

What Is More Important?

dogimo
My name is Joe, and I can prove it.

As far as I know, I haven't made any money off of this blog and nobody's given me any free shit! In fact, it's kind of bullshit for me to find out about this now, when all this time presumably everyone else has been swimming in a sea of palm-grease, surfing in on the waves of payola while lining their bathing trunks with thick sheaves of filthy lucre!
Where's mine? Is there a grievance e-mail address that can be made available to we who seek redress for having been so grievously snubbed?
I got NOTHING.
Notice dated 12/1/09. Notice will be revised as soon as I tap my share of that sweet, sweet, internet swag.

For Today's CAT AND GIRL!